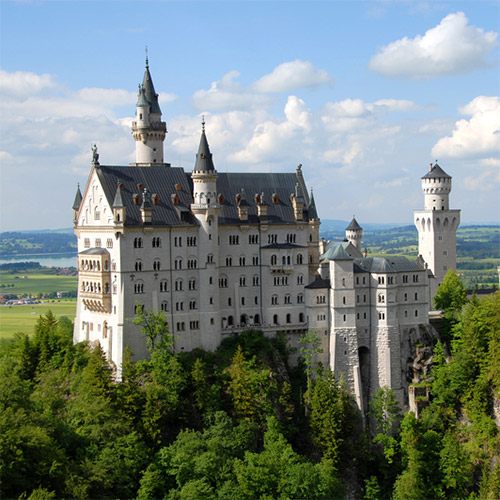 The castle Schloss Neuschwanstein stands high over Hohenschwangau near Füssen in south Bavaria. The building was constructed starting in 1869 for the Bavarian King Ludwig II as an idealised impression of a knight’s castle from the Middle Ages. The drafts originate from Christian Jank; Eduard Riedel and Georg von Dollmann undertook the realisation. The king only lived for a few months in the castle. He died even before the completion of the park. Neuschwanstein was originally known as Neue Burg Hohenschwangau, it has been known by its present name since 1886. The owner of the castle is the Free State of Bavaria, and is under the control of the Bavarian Administration of State-Owned Palaces, Gardens and Lakes.
Neuschwanstein is the most famous of Ludwigs II’s castles and is one of the most well-known places of interest in Germany. Every year, it is visited by over one million tourists. Neuschwanstein, often described as a fairytale castle, can be viewed and is open to visitors almost all the year round. The architecture and interior design are characterised by the romantic eclecticism of the 19th century; the castle is classed as a major work of historicism.

Here you can find the current dates and events

Places of interest and excursions are only a stone’s throw away...